Menu
Get a Free Quote Now !

There are many steps in the LED lamp production process. We’d like to introduce them briefly to you.

First, making semiconductor materials which is also called a semiconductor chip. Semiconductor materials are “grown” in high-temperature and high-pressure chambers. Elements such as gallium, arsenic and/or phosphorus are purified and mixed together in a chamber and then liquefied into a concentrated solution. After the elements are mixed, drop a rod into the solution and slowly pull it out. When pulled, the solution crystallizes at the end of the bar, forming a long cylindrical ingot.

The material is then cut into semiconductor wafers and basically polished, like a table, until the surface is smooth. It is then dipped into a solution of various solvents for a rigorous cleaning to remove any dirt, dust or organic matter.

Then, additional layers of semiconductor material are added to the chip.

Next, the metal contacts are defined on the semiconductor. This is determined at the design stage and takes into account whether the diode is used alone or with other diodes.

Finally, attach the diodes to the appropriate package, connect the wires, and then wrap everything in plastic.

Therefore, lots of equipment will be required during the LED light production. 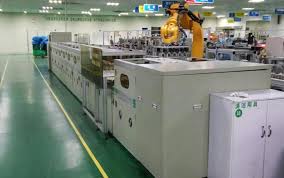 Lamp-led packaging is in the form of potting. The process of sealing is to inject liquid epoxy into the LED molding cavity first, and then insert the pressure welded LED bracket, put it into the oven for epoxy curing, and then release the LED from the cavity to form. It is called gluing, one of the LED packaging methods.

2.About the glue dispenser

LED light packaging equipment is a kind of colloid for the corresponding control, and the colloid in its specific form distribution/coating! Specialized automated control equipment “on” or “inside” of a particular product.

Wafer expander is to evenly separate the tightly packed  wafers so that they can be better implanted into the welder. It makes use of the heating plasticity of LED film and adopts the upper and lower control of double cylinders to evenly spread single LED chip around and automatically form after satisfying chip gap. The diaphragm is tight and unchanged.

Packaging equipment, mainly used in the rapid fixing of chips.

Finished follow-up equipment, mainly on diodes and other components of the pin cutting, bending finalize the processing. According to the different shaping devices, PLC control selection of different cutter operation.

7.About the vacuum pump

Manufacturing process used to manufacture LED light emitting diode/digital tube, epoxy resin bubble removal equipment, its principle is: the air flow rate is very high when the pump high-speed rotation, the pressure becomes very small, in the diode to create a low pressure area, so that it is evacuated.

Packaging equipment, the main role is to chip and circuit board welding.

10.About the scribing machine

One of the  packaging equipment, the main function is to evenly daub a layer of glue film on the module surface.

Production process glue filling, dispensing after the chip sealing equipment, one of the bangding machine series of equipment.

Send a Quote for Price & Catalog !

We can provide all types of LED products，get your free quotation by filling out this form.

Garden light Supplier Give You 3 Advice How To Creat A Perfect Garden?

4 Advantages and Disadvantages of Using LED Work Light with Magnet

We will mail you samples and catalogs later!